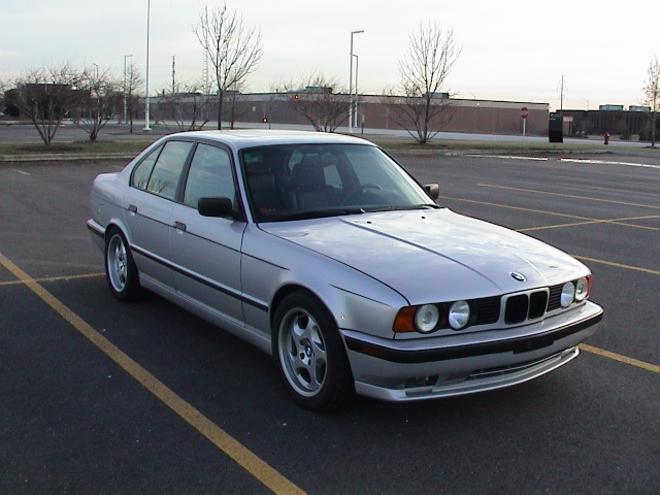 This M5 was imported and federalized around 2002. It had about 51000 original miles when I bought it from Scott Epstein in March 2005. He is a respected member of the E34 M5 message board.

It has the larger S38B38 engine, the last, and greatest evolution of this powerplant before BMW went to the V8 on the E39 M5. Stock horsepower is 340 out the 3.8 liters and it is a screamer.

My friend and I drove the car up from Atlanta to Chicago and it was a fun drive at fun speeds, I’ll just say that. The license plate pictured is from my E12 M535i that I borrowed for the trip to Chicago. I changed it from being debadged on the trunk lid to underbadged as a 525i, back to debadged as of 2006.

In 2005 I had to fix the power seat and memory feature due to a failed memory module. I am running Redline in the diff and tranny, my oil changes are with dinosaur juice every 3000 miles, and I ran 245/45/17 front and 275/40/17 rear Kuhmo Ecsta MX tires for a while but am now back to oem sizes. I put in a moderate stereo with Nakamichi head unit, Boston Acoustics components front and two-way rear, and an old (but brand new, never used, ebay find) Precision Power 4x25watt amplifier in the trunk.

Keep in mind, I wrote this over 10 years ago so “fast” is relative, given the insanely high HP cars now (2019).  Still, I’m preserving this writeup because I do really miss the raw feeling of the E34, yet more refined than the dinosaur feeling E28 and E12!

When you turn off the car and leave the key in the ignition, it doesn’t bong at you crazily when you open the driver door. No red alert “IDIOT, YOU LEFT YOUR KEY IN THE IGNITION!!”. It quietly waits knowing that you can’t lock the doors anyway without the key so what difference does it make if you left it in? I love the ergonomics. They are functional and surprisingly do not look dated (much) by today’s standards. My car does not have automatic climate control, just simple rotary knobs the way I like it. The window controls are in the center console the way most BMW’s have been. I like this design very much and I notice at night when I open the door to get out, they remain lighted until the door closes. Nice touch.

Speaking of other nice touches, the shift knob lights up with the pattern. I can’t explain why, but I really dig this. I find myself glancing down at it when driving at night enjoying the soft glow it puts out. The dashboard gauges are the characteristic BMW red back light color, but they put out a more sophisticated, softer glow than my wife’s much newer E46 325ci.

A lot of what I enjoy about the E34 in my opinion represents a crossing over point for BMW that won’t be repeated again. BMW was in some trouble in the late 80’s, early 90’s in the North American market. There are many factors that contributed to this that I learned about in my marketing class, but one thing that I think happened was they were building cars that they thought people should buy. Not what hundreds of focus groups and minivan buyers told them they wanted. In many ways, this is very bad and not what a company wants to do (ignore the customer wishes). But I feel that at this period of time, BMW still knew what was best for us … and they created the E34. It was a huge leap forward in refinement and styling. If you look at it compared to the E12, E28, E39, and the E60, the E34 styling truly stands on its own, COMPLETELY on its own. It has no cup holders and other whining American features. I like to drive with coffee at times so I can’t say I wouldn’t like to have cup holders, but I know BMW built this car to represent excellence and “the ultimate driving machine”, so I live with it. The car is … just has Hans and Klaus intended it to be …. take it or leave it. I LOVE it but it isn’t for everyone and I can understand that. But living with it every day, the car is just so good for so many reasons that you can’t help but admire how “right” they got it and how many things it does superbly even by 2005 standards. The fact that I’m referring to my M5 doesn’t hurt, but even a chipped ’91 535i 5spd is no slouch in power.

Other things I like … no traction control but it does have anti-lock brakes. I’ll handle the driving, thank you very much, and if I wrap it around a tree, it’s my own damn fault. The seatbelts in the rear (not that I ride back there at all) come across your opposite shoulder from most cars. Neat and different. The onboard computer is fun to play with. You can calculate average speed, average mpg, all sorts of things. Find out the outside temperature. My car also has keyless entry and as most BMW’s do, you can use the key in the lock (by turning and holding it) to close all windows and the sunroof. So cool that feature is that I use it all the time in the summer.

My M5 as a euro model has the leather center console and door panels. They just feel SOO good under your skin, running your fingers down the stitching, it feels expensive and lovingly crafted. All M5’s have sport seats and mine are very deeply contoured so that you sit down in them, cradled and held firmly. Wide asses need not apply, there’s a Lincoln Town Car out there somewhere that you should be driving instead.

By pushing the turn signal stalk in, you activate the message center under the speedo and tach, echoing back many of the onboard computer functions and also checking things like engine oil, light bulb status, etc. Can you believe that this car is 12 years old? I certainly can’t.

Finally there’s that glorious motor. It isn’t quiet, it shakes the car at idle, but it is just so pure, such an example of glorious engineering and the pinacle of the S38 BMW engine development that you can’t help wanting to give it a standing ovation. Pop the hood, lift it (nope, you went to the wrong end, this hood tilts up, the RIGHT way), ah, just look at those individual throttle bodies and the valve cover writing. BMW M Power, 340 horsepower out of 3.8 liters? Perhaps 20 more with the chip? There are undoubtedly faster cars out there, but not all have an engine with TRUE racing roots under the hood (NOT roots as determined by a crack marketing team for some TV commercial, where roots means that their production and race motor both have pistons and valves). Certainly very few cars have engines that were built by hand by absolute craftsmen. Many exotics do, but how many family sedans can you think of that are built this way?

Like I said, the E34 M5 is the last of the handbuilt M’s and probably the best, final example of what this way of thinking and engineering can produce. This isn’t to say that there aren’t a few things that I don’t (airbags, ever try to replace a headlight in one of these cars?, and doors that are designed to trap water and hence rust at their bottoms), but there is so much that appeals to me as a driver and owner, that I hope to keep and enjoy this car for a long time to come. May she age gracefully.