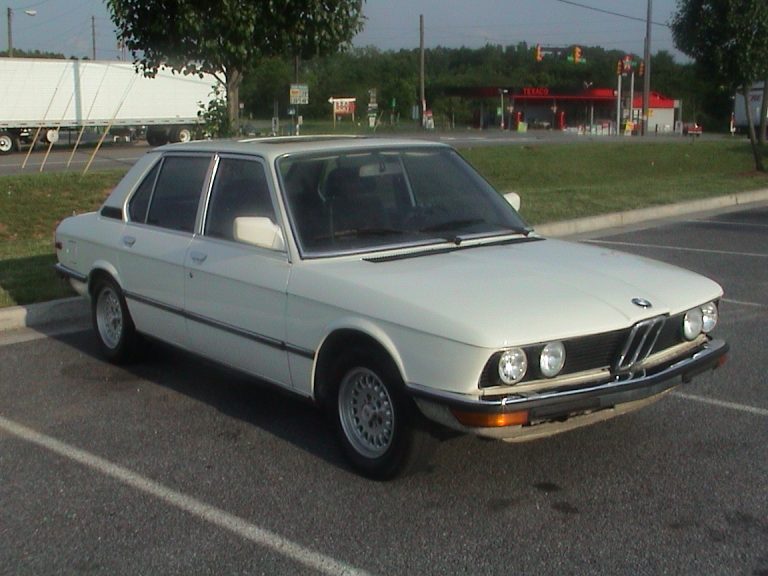 My previous BMW fun car was an 1981 528i that you can read about elsewhere on this website. I bought it as a daily driver and retired it shortly afterwords to be a car to tinker with. Unfortunately, I came to the realization that the money I wanted to put into it with a bigger engine, aggressive aerodynamics and spoilers, as well as many European touches was just an unrealistic goal. It was possible but didn’t make much sense in case I ever wanted to sell the car. There was an E12 5 series that came with nearly all of the bits and pieces on it from BMW that I wanted to put on my 528i. The E12 M535i, the first //M car that BMW Motorsport produced. This car is quite rare in the US however as it was never officially imported. Read HERE to find out more about the history of the M535i.
I decided to sell my 528i and look for an E12 M535i. I already had one in mind from my friend Frank Haas from firstfives.org. I flew out to Oregon to meet Frank and see and drive his M535i in Sept of 2002. Unfortunately, I was hit by layoffs at my company and the car purchase plan was shelved while I looked for another job. Over the winter, Frank had the M535i repainted and when I emerged from my unemployment, I wasn’t prepared to pay the amount that Frank wanted for his M535i after the paintwork.

In late winter, I had seen an advertisement on a collector car sale website for an E12 M535i that looked extremely plain, with no visual cues as to what it was. When things with Frank’s M535i looked as if they would not turn out, I called the number for the advertisement of the other M535i. It had no airdam, no spoiler, and the wheels mounted were E28 5-series wheels. The owner said these were the wheels the car came with when he bought it. The car didn’t have the //M535i grille badge emblems on the front either. The only visual clue about the car’s model, and it was small, was an “//M” badge on the trunk. By asking the owner some questions I was able to confirm that the car was in fact an M535i. The owner answered with what I was looking for when I asked about the shift pattern, confirming that it has the close-ratio 5-speed manual transmission with the dogleg first gear. The pictures he sent me, while extremely dark, gave enough detail to see that the car had the Recaro corduroy interior, a Euro dashboard, a sunroof, and crank windows (more on that later). Finally the VIN # confirmed that not only was the car a genuine M535i, but it was the 18th car built of the 1410 left-hand drive M535i’s! This was quite possibly the oldest M535i still on the road today which to me, was a small detail that raised the car’s value in my eyes considerably.

After some negotiation over the phone, and after a friend from firstfives (Jeff Campbell) who lived in Atlanta went to see the car personally for me and gave me a report, the owner and I reached a deal. I flew down on May 9th, 2003 to Atlanta and we completed the paperwork. I drove it home to Chicago, stopping around 2AM when I got to Illinois, and continuing the drive Saturday morning to Chicago. The car did wonderfully!

MODIFICATIONS AND UPGRADES JUNE 2004 TO AUGUST 2005