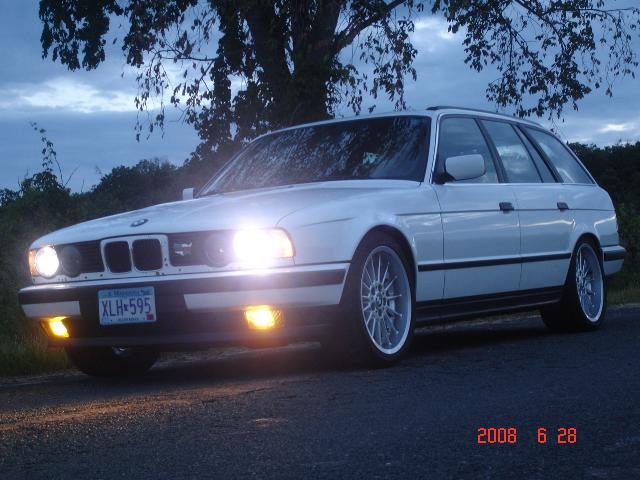 Specifics:180+K miles, intermittent running issues where car will shut off while driving, used a small company’s runabout for the last two years. Northern California car w/no rust. Carfax says it was originally a BMW North America fleet car in its early life, until about 6K miles

Specifics:250K miles, rusty, beater with many warning lights on (light bulbs, coolant, EML). Unfortunately it’s an ASC car which I didn’t realize until I got it so I need to locate a few more parts to do the swap since I don’t want to switch over this electronic throttle it has. Two unexpected bonuses were a limited slip rear end and a newer radiator. Note war wounds on body and passenger side mirror ripped off.

The plan with these two cars is to build something that BMW never made, even in Europe. A 535iT, or in English, a wagon powered by BMW’s Big Six M30 3.5 liter engine. I’ll also be using a 5-speed manual transmission.

You might ask, what’s the point? Well, versatility and a solid platform for a rocketship sleeper are the main ideas. The M30 Big Six was at its height in the early 90’s with the E34 5-series. BMW stopped using it after that as newer and better engine designs emerged. But like the small block Chevy V8, the M30 benefited from decades of innovation and improvements as well as proven reliability due to its overbuilt nature. It’s a simple, reliable, torquey powerplant which is extremely easy to get parts for. The later motor that I’ll be using has the added benefit of bigger valves in the head than the earlier engines in the 70’s and 80’s. The platform for a rocketship stems from this. The M30 has gained notoriety in the last decade or so for its inherant specs that favor turbocharging. Low compression, a rigid engine block, and other features have netted some very high horsepower and torque numbers from others who have turbocharged these motors, and they still remain reliable for daily driving.

The initial plan is to get the transformation of the engine and manual transmission to the Touring completed. I’ll drive it and enjoy it for a while in this configuration because it still will be no slouch with decent power and torque. But later, it will beg to have forced induction turbocharging added to spice things up.

The conversion is going to be performed in March by the noted Ben Thongsai here in Chicago, an expert in older BMW’s and one of the few that can do this swap keeping all the wiring harness gremlins out of the mix. So far the list of modifications and parts to be used looks like this:

Transfer M30 3.5 liter to Touring and freshen it up a bit. Likely a head gasket, valve job, timing guides and chain, and an oil pump will keep it reliable.

Keep self-leveling suspension on the Touring in the rear, but add bracket to use the pump on the M30 engine

Add H&R lowering springs specially ordered from Germany, designed to work with E34 Tourings that have self-leveling suspension. Bilstein HD’s will be used in the front.

New belts and hoses will be used on the engine during the swap.

So far that’s the list. Still to be seen is whether I will need to put in a new exhaust and there will surely be other things to resolve. But I’m excited to do this project and have a fun, torquey, manual transmission station wagon, with possible turbocharging prospects later.

Here’s an update on the car since it’s been a few months since the transformation. The sunroof works (by some miracle, I just played with it until it worked). The headlights are converted to the Hella Euro smoked ellipsoids using the McCulloch HID kit from ebay (5K light temperature). All city lights, ballasts for the HIDS, etc were wired up nicely.

Also the H&R springs and Bilsteins are on the front of the car. The rest of the suspension still needs to be completed, soon hopefully. The UUC shift knob was ditched for a BMW M Technik unit that feels much better in my hand.

Also the 850ci four piston Brembo front brakes are on the car, but I still have to put the E34 M5 rears on when I get the right calipers.

I haven’t done any updates to this in so long since we moved from Chicago but now that we are finally getting more settled in our new house, here’s a recap of what I can remember in the last year or so.

One of the biggest thing was scoring a set of pretty rare 18″ E39 Style 32’s from craigslist for a good price. I ended up swapping those to use as my summer rubber with Yokohama S-drive’s in a 235/40/18 front and 265/35/18 rear. Even running the metal hubcentric rings from Tirerack I still get a really annoying vibration. I’m told by Yokohama to try getting the car aligned to be sure before blaming the tires. One wheel was bent as I found out later so that was $150 to repair, but it still didn’t fix the vibration. Anyway, see pics below.

Also I finally found a set of the H1 E34 foglights and fitted them with brand new, BMW OEM yellow lenses ordered from Europe. Again, as with the Hella headlights, I protect them with Lamin-X clear in a 40 mil thickness.

I took the car to a track event in May at Brainerd with the BMW CCA. That was fun and it did quite well, for a big heavy bitch. Still it is no track car.

I’ve been tackling lots of other misc crap on it as well and have fixed a few of the items that weren’t working. I bought two new microswitches for the tail gate to get the hatch and glass buttons working finally. I put in a new Interstate battery for preventative maintenance. I also had a big project to work on the Touring hatch wiring which wasn’t fun, taking it apart and resoldering wires that were broken. That was early in the year, but it fixed in-op reverse lights, the rear wiper wouldn’t return to the park position, and I think a tail light. It was a mess. I also finally put in a new cabin air filter which hadn’t been done in who knows how many years judging by the old filter I pulled out of there.

I am nearing the two year mark on the original 535i 5spd donor’s rusty, oem exhaust that Ben told me would only make it a year or two. So I have a new/used E34 M5 exhaust complete with high flow cats and an x-pipe that I got for a great price, less than half of what a new exhaust would cost (and I got cats with it as well, as there’s no telling how old the cats are on the car now). I hope to get that exhaust put on in the next few weeks.

There’s a lot to remember so here’s some more info. I have the Brett Anderson/ Koala Motorsport E34 door brake reinforcements but I just haven’t put them in yet. I broke one of the rear door handles by kicking it in the winter (brittle plastic) so I had to take the door apart to replace that. Also as preventative maintenance I put POR-15 on the bottoms of all four doors and replaced the rubber molding at the bottoms. The doors were all nearly perfect from being in CA with only one or two surface rust spots starting to appear so I think I caught it in time. THe POR-15 should do the job (see pics below with the black POR-15 just peeking from behind the new rubber molding strips).

Oh, and the strut brace was added some time ago as well for engine bay eye candy!