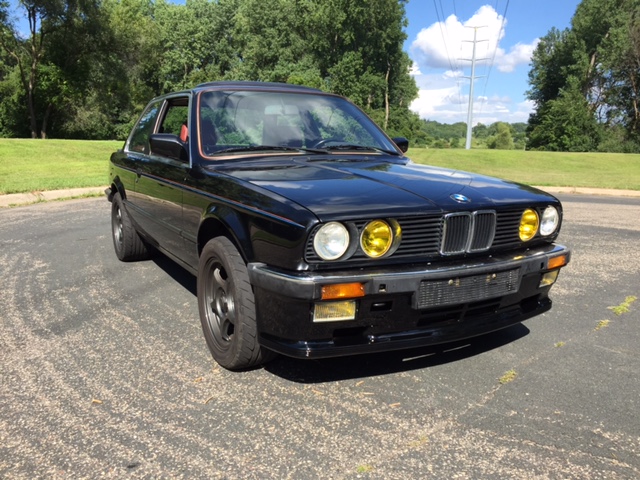 We bought it from a R3vlimited forum member local here in MN before E30 prices went nuts. It would have been in 2009 I believe. There were grand plans to get a track car, but a second kid and life got busy, and the car sat, and sat, and was driven very seldom. Then it developed a coolant leak and it was parked (in a cozy, indoor garage for 3 years). Then this Spring, after making time to replace coolant hoses and a few vacuum hoses around the throttle body, she was back running again. The brakes are slightly mushy, but adequate. I also installed a short shifter, but didn’t pull the driveshaft to get all the parts installed to do it right where the rod linkage attaches to the trans. So it’s still incomplete.

Before it was parked for 3 years, I also started a euro bumper conversion. It’s not perfect, but it’s ok. The front turn signals are in-op because I never wired them in, debating how to approach it.

After I sold the car to Alex (and he promised to keep it for himself) he spent a ton of money redoing many things and sold it on bringatrailer.